Aaron Morrow, graduating class of 1992. Aaron was an all-star athlete at Dansville. In football, Aaron was selected 1st Team All-Greater
Rochester, 2nd Team All-State and an All-County All-Star. Aaron set records for most yards receiving in a season and is 2nd all-time for most
receptions in a season. Aaron was a part of the 1990 and 1991 Livingston County Division I football championship teams, as well as the 1991 Section V football championship team. In basketball, Aaron was selected as an All-County All-Star.

In their final year of coaching together, Phyllis & Larry, were recognized as the 2018-2019 Section V – Coaches-of-the-Year. Altogether, the duo were awarded 8 Coaches of the Year.

The Dansville Athletic Wall of Fame currently consists of 62 members.
Information to nominate an individual can be found at: https://www.dansvillecsd.org/Page/2543

Chairmen of the Athletic Wall of Fame Committee, Dave Moodie stated, “Dansville Athletics has a proud tradition of talented athletes and coaches who were fierce competitors that achieved championship level accomplishments. The members of this year’s induction class, exemplify the standard of excellence that is required to become a Mustang Wall of Fame Member. 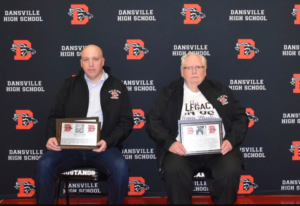 Inductees from left to right: Aaron Morrow and Larry Greene