According to a press release from Livingston County Sheriff Thomas Dougherty, Kyle Webster, 21, was arrested for two counts of felony Possessing a Sexual Performance of a Child and one count of misdemeanor Petit Larceny.

“Dansville School Officials handled the personnel matter immediately upon the discovery of the situation and have fully cooperated with the investigation,” said the press release. “There is no reason to believe that any students were affected by the incident.”

On Oct. 4, 2017, a teacher at the Dansville Central School District reported there were inappropriate website searches done on her computer overnight. School officials contacted the School Resource Officer, Sheriff’s Deputy Bob Holt, and alerted him of the situation. The SRO was able to develop a suspect, Webster, who was employed as a custodian.

Members of the Sheriff’s Office Criminal Investigation Division assisted with the investigation and recovered the computers from the school as well as electronic devices from Webster’s residence. The computers and electronic devices were examined at a Regional Forensic Computer Lab. There were no illegal images found on the school computers, however there was what is believed to be child pornography on Webster’s cell phones.

Webster was also charged with Petit Larceny as it was also determined that he stole approximately $150 from a fund-raising envelope form a teacher’s desk.

Webster was turned over to Central Booking Deputies at the Livingston County Jail for processing and pre-arraignment detention.

Dansville Village Justice Scott Kenney arraigned Webster and ordered him held at the Livingston County Jail on $1,000 cash or $2,000 bond. 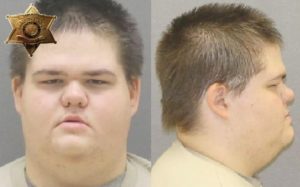