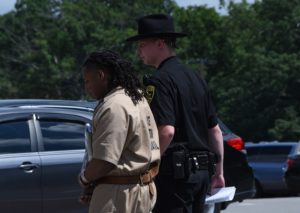 LIVINGSTON COUNTY – The District Attorney and a judge both declined a man’s request for a plea deal and 7 years in prison to satisfy multiple serious felony charges after a chase through the Village of Mount Morris.

Gerald Bradley, 33, faces felony Criminal Possession of a Weapon in the Second Degree, felony Menacing a Police Officer, two counts of felony Criminal Possession of a Controlled Substance in the Third Degree, misdemeanor Reckless Endangerment and misdemeanor Resisting Arrest. Mount Morris Police arrested Bradley with Rachel Cole, 28, after their car allegedly sped through the Village and Bradley pointed a handgun at police, took off on foot and was tased. Officers allege that he possessed 48.7 grams of cocaine and a loaded handgun.

“The court indicated that the sentence would be 10 years DOCCS [prison] based on a guilty plea to Criminal Possession of a Controlled Substance in the Third Degree as a second felony offender,” said Bradley’s attorney, Chief Public Defender Marcea Clark Tetamore. “My client has indicated that he is not willing to accept that offer and so we are scheduled for trial August 22.”

As soon as Tetamore finished her remarks, Bradley held up some documents and asked if he could ‘ask the court a few questions.’ Judge Robert Wiggins said that as per typical courtroom procedure, he would not be engaging in any type of ‘back-and-forth’ with a defendant.

“I should explain for the record that my client has documents entitled ‘motion’ and I explained to my client that the court does not consider pro-se motions when a defendant has counsel,” said Tetamore.

Bradley asked if he could have some more time to talk to Tetamore. Wiggins agreed that the case should be recalled in a few minutes while the court handles other cases scheduled for Tuesday morning.

Tetamore, Wiggins and District Attorney Greg McCaffrey had a brief off-the-record conference before coming back on the record, as is typical when an issue arises during court proceedings. After the conference, Tetamore communicated Bradley’s counteroffer to the court.

“My client is asking to plead guilty to Criminal Possession of a Controlled Substance in the Third Degree for 7 years in DOCCS or 8,” said Tetamore. “My understanding is that the DA will not go along with that.”

“And that decision is indicative of the DA’s analysis of the case,” said Wiggins. “I’m not going to deviate from the recommendation at this point.”

“The offer is 10,” said McCaffrey. “That’s actually a revised offer from 12 when this case came in.” 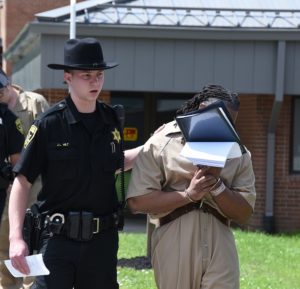