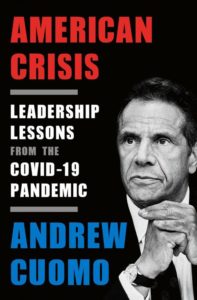 The Joint Commission on Public Ethics voted 12-1 to undo permission that was given by agency staff to former Governor Andrew Cuomo to write his book about how he led NY through the pandemic. This may cost Cuomo dearly – both in prestige and dollars.

Cuomo had heavily promoted sales of the book through national TV and other media outlets, helping him earn $5.1 million. In the approval process last year, Cuomo had agreed not to use any state personnel or property to write it. He also agreed that the book would be “unrelated” to his official duties as governor.

Crown Publishing halted promotion and further copies of the book following the mounting allegations that Cuomo sexually harassed a number of women, which eventually led to his resignation.

The JCOPE vote Tuesday means Cuomo would have to reapply to the full board for approval, a dicey venture for the ex-governor. If denied by the board, or if Cuomo does not apply again, the state could seek to impose fines on him or force him to pay back to his publisher some of the profits he made.

Jim McGuire, a lawyer for Cuomo,  said “We look forward to vigorously contesting in court any efforts JCOPE makes to enforce this baseless and improper decision.”

“Governor Cuomo’s contract with his publisher was being negotiatedat the very same time that Mr. Cuomo and his administration were doctoring records to hide thousands of senior citizen deaths caused by misguided Cuomo policy choices. It strains credulity to think Mr. Cuomo would have won this lucrative book contract had that terrible truth been known.

“Mr. Cuomo’s use of state resources alone is sufficient to rescind his contract, but there is more to this story and investigations must