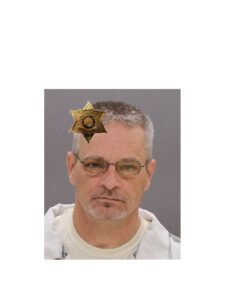 Sheriff Thomas J. Dougherty reports the arrest of an Erie County resident on felony and misdemeanor charges
following an investigation by the Sheriff’s Office.

On May 12th, 2022, at approximately 4:30 pm, the Livingston County Sheriff’s Office members responded to a
business in the Town of Lima for the report of a robbery. Through the course of the investigation, two suspects were
identified.

It is alleged through the investigation that Richard W. Cooper, age 54, of Buffalo, purchased multiple items at the
business in Lima and paid for the property with checks associated with an account that did not exist. The
amount of the property purchased did exceed one thousand dollars.

The co-defendant in this incident was arrested on June 18th, 2022. At the time, Deputies were unable to locate Cooper,
so a warrant was issued for his arrest.

On October 25th, 2022, the Livingston County Sheriff’s Office was contacted by the Cheektowaga Police Department, who
advised they had Cooper in their custody due to an investigation in their jurisdiction. Later that day, Cooper was
turned over to LCSO on his active arrest warrant.  Cooper was charged with Grand Larceny in the Fourth Degree, a class E felony, and Petit Larceny, a class A misdemeanor.

Cooper was transported to Central Booking Deputies at the Livingston County Jail for processing and pre-arraignment detention. The District Attorney’s Office was contacted regarding bail based on the felony-level charge. It was recommended that Cooper be held without the possibility of bail due to having seven previous felony convictions.

The investigation was handled by Sheriff’s Deputy Evan Wolfinger of the Patrol Division and Sheriff’s
Investigator Matt Orman of the Criminal Investigations Division.