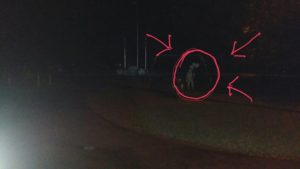 LIVONIA – A community member’s report of a creepy clown in Vitale Park has put the Livonia community on edge.

It all started when the above image was posted to Christopher Cody Hooper’s Facebook page with the following warning:

“Okay…so I pull up to Vitale Park tonight to walk the dogs with my girl and there’s this creeper sitting on the swingset,” posted Christopher Cody Hooper. “There are no other cars in the parking lot at all. So I’m quick to pull out my phone and snap a pic and as soon as I do, dude takes off running. I’m definitely not the type to call the cops (and the substation is right there) but I don’t think I’m gonna go there after dark anymore. Plus, I guess there has been a bunch of these type of sightings going on in all different states. So, for those of you with kids, you might not want them in the park at night or alone for that reason. Pass this on as a warning.”

However, shrewd internet users picked apart the image as an especially good fake.

“Not different balloons, same balloons changed to different colors,” commented Destiny Burke Whipple. “Position in the same, clothing has the same reflections and wrinkles as the brighter photo posted, same outfit, same position of balloons, same everything…the clincher? The flag poles in the distance are less distorted than the clown that is closer…the clown is distorted which means it was taken off facebook and added in (facebook distorts after saving from the constant shrinking of pixels)…anyone with photoshop and basic knowledge could have pulled this off…I use it every day and this post still fooled me…until I saw the brighter clown photo.”

Indeed, Lori Hoffere Pease was able to find and post the original photo of this clown from elsewhere on the internet.

Still, neighbors are at best thoroughly creeped out, and at worst feel that their families are in danger. Other clown hoaxes have apparently been springing up in Livingston County. One photo of a creepy clown was reportedly taken in Groveland.

In any case, it seems like most of the community does not appreciate reported sightings of clowns, real or not.

“This is fake! Why would someone post this?” posted Patty Callahan-Hoffman. “You are a complete idiot for causing unwanted drama! Do not share this and get people in that area in an uproar.”

Livingston County Sheriff Thomas Dougherty said that allegations of clown sightings in bordering counties have been investigated. These investigations found no known threats to the public. Still, anyone who sees a person dressed as a clown hanging around suspiciously is encouraged to call the Sheriff’s Office at (585)243-7100. 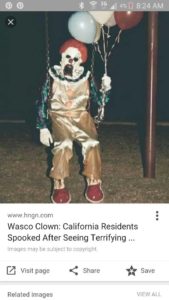 What is believed to be the original clown image which was photoshopped into Vitale Park. (Image/Lori Hoffere Pease) 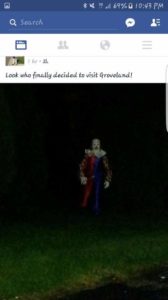 The image that reportedly came from Groveland. (Photo/Tiffany Porter via Facebook)