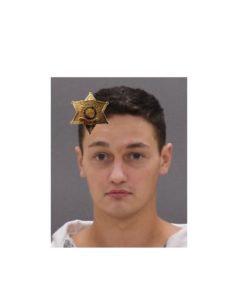 Sheriff Thomas J. Dougherty reports the arrest of a Conesus NY resident on several felony charges following the investigation of a disabled vehicle and crash by the Sheriff’s Office.

On June 26, 2022, at about 2:24 a.m., Deputy Menzo Peck was dispatched to the area of West Lake Road and  Lakeville Road in the Town of Livonia for the report of a possible disabled motorcycle with two occupants and the operator possibly intoxicated. The call had come in through Livingston County EMS as they observed the operator tip the motorcycle over at the intersection and attempted to speak with him.

The county EMS rig was still posted near the intersection of the original disabled vehicle call and proceeded to assess the patients immediately.

The preliminary investigation revealed and alleges that the motorcycle was traveling south on West Lake Road at a high rate of speed. The operator, identified as 23-year-old Joshua M. Stitt, traveled through the intersection of West Lake Road and Lakeville Road when he lost control and crashed into a wooded area.

Both Stitt and his passenger were transported by ambulance to Strong Memorial hospital for treatment of the potentially life-threatening injuries.

Sheriff’s Investigators did obtain a blood sample from Stitt as part of the investigation to test for BAC (blood  alcohol content). The blood sample was sent to a forensic lab for testing.

The lab results revealed that Stitt’s BAC was .18%

On July 21, 2022 Sheriff’s Investigator Brad Schneider arrested and charged Stitt with felony Reckless  Endangerment in the First Degree, felony Assault in the Second Degree, felony Aggravated Vehicular Assault,  Aggravated DWI and several violations of the Vehicle and Traffic Law. The assault charges were due to the  serious injuries to his passenger on the motorcycle.

Stitt was turned over to Central Booking Deputies at the Livingston County Jail for arrest processing and pre arraignment detention, as the assault charge did qualify for pre-arraignment detention under the NYS Justice  Reform Act. The District Attorney’s Office was contacted in regards to bail due to the felony level charge. It  was recommended that Stitt be held on $15,000 cash bail or $30,000 bond.

Stitt was later arraigned at the Livingston County Centralized Arraignment Part (LC-CAP) at the Livingston  County Jail before Town of Mount Morris Justice Ossont. The Judge did remand Stitt to the custody of the  Sheriff, setting bail at $5,000 cash/credit or $10,000 bond.

The investigation was conducted by members of the Criminal Investigations Division, the Forensic  Identification Unit (FIU), the Patrol Division and Command Staff.

Both Stitt and his passenger are recovering from their injuries.