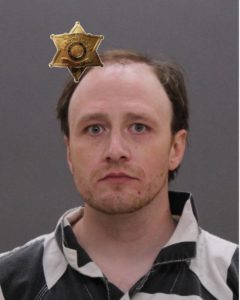 On February 13, 2021 at approximately 6:00pm, Sheriff’s Deputies, responding to the area of Federal Road and Cleary Road in the Town of Livonia for the report of a single motor vehicle crash found the driver over the legal amount of alcohol as well as carrying an illegal substance.

The vehicle, operated by Brett A. Herrick, age 37 from Morrisville, NY, was traveling north on Federal Road when it left the roadway and struck an earth embankment. The vehicle then continued northbound on a wheel rim for approximately one-half mile before leaving the roadway again & becoming disabled in a residential yard.

Investigating Deputy Sheriffs suspected that Herrick was under the influence of alcohol. Deputy Michael Phillips, who is assigned to the STOP DWI Unit, responded to the scene to conduct a DWI investigation. Following the investigation, Herrick was taken into custody for DWI. Herrick was also found to be in possession of approximately one hundred and forty three (143) grams or measured in ounces, approximately five (5) ounces, of suspected marihuana, which later tested positive for THC.

Herrick was then transported to the Sheriff’s Office Headquarters in Geneseo where he was offered a breathalyzer to determine his blood alcohol content (BAC) however, Herrick refused to take the test. A records check revealed that Herrick did have a previous conviction for DWI within the past ten (10) years. Herrick was arrested and charged with felony Driving While Intoxicated, Criminal Possession of Marihuana in the 4th Degree, and violations of the NYS Vehicle and Traffic Law.

Herrick was turned over to Central Booking Deputies at the Livingston County Jail for processing and pre-arraignment detention. The offenses did qualify for arraignment as the Judge can invoke driving restrictions however, the Judge cannot set bail under the NYS Justice Reform Act.

Assisting with the investigation on scene for the Sheriff’s Office were Deputy Justin Hilt, Deputy Laszlo Babocsi and Deputy Gage Harrison under the command leadership of Sergeant Caleb Cutting.