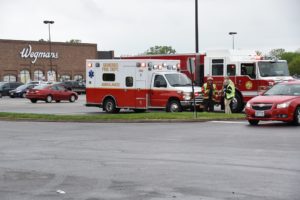 The victim is checked in a Geneseo ambulance. (Photo/Conrad Baker)

According to first responders on scene, the driver of the blue sedan was northbound on Genesee Valley Plaza Road, headed out of the Wegmans plaza to 20A, when they failed to yield right of way to a pickup truck and the vehicles collided after 3:20 p.m.

Traffic was held up briefly while Geneseo Fire and Ambulance personnel arrived.

After a few minutes, traffic resumed with only the northbound lane of Genesee Valley Plaza Road blocked because the blue vehicle was disabled.

The pickup was able to drive from the scene.

Firefighters and an ambulance crew with Geneseo Fire and Ambulance responded to the scene alongside New York State Troopers. 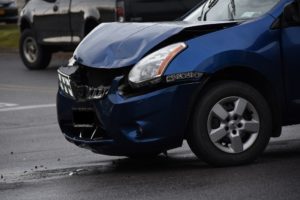 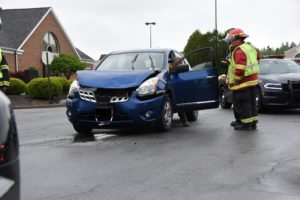