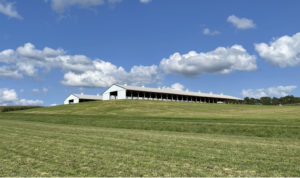 Tomorrow, Saturday, September 10, 2022, the public is invited to the COYNE DAIRY FARM, the public is invited to COYNE FAMILY
The Farm Fest will be open from 10 and 3 PM.  The COYNE family ( 1770 Jenks Rd. Avon, NY  14414)  is celebrating 100 years on this Farm operating in the Dairy Farm business.
Steven Coyne, 3rd generation of the Coyne family took a moment to speak with a member of the public.
His father, Shaun Coyne, was working.  “My father is a Jack of all trades,” Steven said.  Whether he is driving cattle, tending crops or any of the daily tasks in operating the farm, he has to be a Jack of all trades.”
Asked for a couple of examples, the 35 year old replied, “Delivering new calves, changing oil, maintenance in an old barn, building new barn, preventative maintenance.”
Steven’s responsibility is Animal Husbandry.
His father, Shaun, Inherited the farm from his father, Dick Coyne, who founded the farm in 1922.  So, this is the 100th Anniversary of the Coyne Family Farm.   So, this Irish immigrant family is taking 5 hours off to welcome neighbors and other members of the public to introduce local folks to their family tradition and work of love.
Ongoing growth is happening everywhere you look on the farm.  Barns housing grain, cattle, milking cows, and equipment are visible from Route 390.
But the work of raising Heifers, (the goal is every cow will calve) milking them and delivering milk to the local milk plant forms the nucleus of daily operations.
The opportunity for an introduction to this family’s tradition is a glimpse into Finger Lake history.  Generations of Farming families have sustained New York neighbors and surrounding states for generations,
Steven Coyne mentioned there are “New barns including a New Calf facility.”  He said, “we keep careful
track of genetics.”
“The Coyne farm has several pedigreed bulls, he said. “The Farm focus is strictly dairy and reproduction. There is no on-site processing.  As livestock ages, 10 years or older, stock is sold to livestock markets.”
Mr Coyne pointed out, “The Farm focuses on the nutritional health.    Corn silage and hay silage are carefully managed and processed to provide healthy food for each of our the farm animals.”
Farm operations are fascinating.Milk is produced daily by the milking cows.  The milk produced is brought through cullers, storage and picked up several times a day by milk trucks to local milk plants
Steven Coyne said, “The milk from Coyne Farm, you serve your family is just as as natural as the moment milk arrives.”
Like the rest of us, modern day political battles, fuel and operating expenses as well as maintenance, insurance and utilities are a constant battle.  But, the 33 year old smiled.
In his smile, one might have caught the glimpse of lessons learned on the farm.
One considered his grandfather, Dick Coyne, faced the challenges of being a pioneer farmer.   And Steven’s Irish stock animates his father, Shaun Coyne, so the family business evolved to manage and meet the challenges his generation were dealt.
Refreshing breezes in the warm September sun, filtered in the shade of evergreen trees as we talked.  Recent rains brought fresh scent to the green grasses where the horses are corralled.
Mr Coyne’s grace in meeting a member of the public. The ease with which the farm employees carried on their daily chores seemed to echo back in time.
The Coyne Farm Fest is tomorrow, September 10 from 10 am to 3 pm.