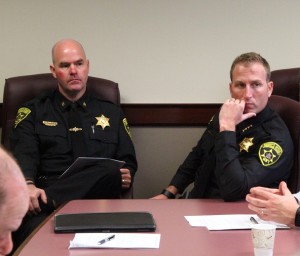 LIVINGSTON COUNTY – The Livingston County Ways and Means Committee unanimously approved propositions by the Sheriff’s Office to update the ranking structure at the county jail and 911 center, passing it along to the Board of Supervisors for possible final approval.

“The way I think of this is as a title change. To compare with surrounding counties, there are typically four, five, six or eight supervisors in each division,” said Dougherty. “We run a tight operation, and have supervisors in every division except 911. The way it is now, in the absence of Director Mann, supervision typically goes to a road patrol supervisor, who is not upstairs at the call center.”

At the 911 center, five of 15 current civilian dispatchers will be reassigned as supervisors and their former positions will be deleted so that no additional hires will be necessary. The Sheriff’s Office is most closely looking at current Dispatcher Randy Worden for communications specialist. He would do the work of a 911 dispatcher, help to smoothly integrate new technology as part of the ongoing $4.6 million overhaul of Livingston County’s emergency communications systems, and handle grants for the 911 center.

The new titles at the 911 center would cost the county approximately $20,000 in additional wages.

The updates at the jail would cost no additional money for the county. The Sheriff’s Office is looking most closely at Sergeant Jeff Hammond at the jail as a candidate for the new captain position.

“We would create a salary captain position to eliminate overtime,” said Yasso. “Jeff comes in a lot at night or when I can’t. In his new position he would make $69,000. For comparison, that’s less than a corporal would make with overtime, and much less than a road captain. He made $71,000 last year with 220 hours of overtime.”

Ways and Means Committee Board member, Livonia Town Supervisor and Chair of the Board of Supervisors Eric Gott approved of the changes and said it would clarify command at the jail especially.

“[The updates] would clear up some issues with a sergeant working for a sergeant,” said Gott.

The proposed changes will now go to the Board of Supervisors for final review and possible approval.