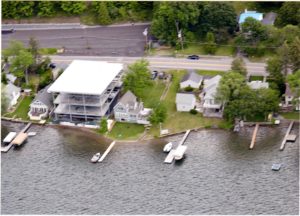 CONESUS – The litigants in the case against the Town of Conesus for allegedly railroading the oversized Myers Inn project updated the media on the status of the Town’s newly rewritten proposed zoning change that would allow longstanding businesses to expand indefinitely.

According to a press release from Tom Bruckel, Trish Bruckel, Robert Siracusa and Sally Hirth, on Thursday July 13, the Livingston County Planning Board cast an unofficial vote against approving the proposed Town of Conesus change to the definition of ‘Legacy Business.’

“Our question for the board is: what is being done to address the concern that there are currently no restrictions on expansion, both inside and outside of the lots, of the currently defined Legacy Businesses? If the two marinas were to apply to expand their buildings to look exactly like the current Myers Inn structure, are there measures in the Town Code to stop them? If not, how could the Town Board allow this to happen?”

Even when the County Planning Board has a quorum, they merely make a recommendation. If the Planning Board voted to recommend that the change not go through, the Town could still go forward.

The neighbors said that the proposal was in front of the Livingston County Planning Board for the second time in less than a month, and both times the board declined to approve the proposed change. The vote at the most recent meeting was not official because the board did not have quorum.

“As described in earlier press releases, it is believed that the proposed amendment is an attempt by the Town to change their zoning laws in an effort to give post-hoc approval to the Myers Inn project,” said the neighbors’ press release.

Some members of the Town Board say that the Myers Inn as proposed would be a good thing to have on the lake.

“The community needs to be whole, period. It’s all good people. There are no bad people here,” said Town Board member Tim Beardslee. “Mr. Myers used a lot of extra funds to build a new foundation for that building. Carl Myers is a philanthropist. The Inn is like a donation. It’s a gift. This is not a normal commercial endeavor. Mr. Myers is trying to build something that benefits the community he loves.”

The neighbors have maintained throughout that the law designed to railroad the Myers Inn project and that the project should not be allowed to go forward as is.

“If the Town Board does its job and addresses the concern of the LCPB and places reasonable restrictions on the expansions of Legacy Businesses, both within and beyond their existing parcels, to reflect the comprehensive plan, the Myers Inn should not be permitted in its current form,” said the neighbors in their press release. “The Conesus Lake community and all neighbors of such businesses deserve that this issue be addressed and limitations be placed on expansion of all Legacy Businesses. Without these limitations Smith Boys’ Marina and Mark’s Marina might be able to expand across their existing lots and build up to a height of the current Myers Inn. The result of the Town Board’s inaction could be three buildings towering over Conesus Lake and the destruction of the beauty of the lake. We believe the people of the Town of Conesus, Conesus Lake and Livingston County deserve answers and protection from the Town of Conesus.” 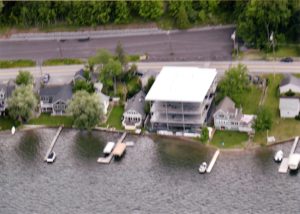