LIVINGSTON COUNTY – The Board of Supervisors voted at their Wednesday meeting to have third party counsel investigate an accusation that Chairman Eric Gott made inappropriate comments to a woman at a bar after a conference in Albany.

Caledonia Town Supervisor Daniel Pangrazio called for an executive session to discuss the employment history of a specific individual, for which Gott stepped out of the room. The rest of the board held their private executive session and took no formal action. Then Pangrazio asked to have third-party counsel conduct fact finding ‘in response to the allegations of some county employees.’

“Ms. Hillier will engage third party counsel to make inquiries with respect to what was alleged to have occurred,” said County Administrator Ian Coyle. “I think you saw that the board, inclusive of the chairman, was supportive of that.”

Gott said that he ‘fully supports’ the fact finding and ‘looks forward to participating in it.’

“I appreciate the fact that this will be investigated and my name will be cleared,” said Gott. “I voted for it and and thanked the board publicly. I want to be clear, her account of what happened that night is not correct. I will not talk about it more until then. In the meantime I will be focusing on the remaining days of my campaign, my family and the operation of the Town and County.” 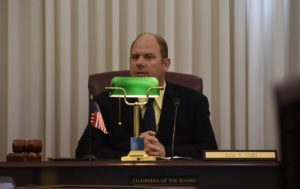