LIVINGSTON COUNTY – The Livingston County Conservative Party announced Tuesday that they are endorsing Sheriff Thomas Dougherty in his re-election bid.

Livingston County Conservative Party Chair Rev. Jason McGuire said that the party’s endorsement is based on the experience that Dougherty has gained

“Looking back on the 2013 election, experience was a key issue for many Conservative voters looking for the next Livingston County Sheriff,” said McGuire. “Following that election, I spoke with Sheriff Dougherty, and told him that if he handled his position well, that he would be the candidate with the most experience heading into 2017. The Conservative Party recognizes that every new officeholder will have a learning curve, but Sheriff Dougherty has adapted to the demands of his office more quickly than anticipated. Over the last four years, he has led the Sheriff’s Department with integrity, and by example. Accordingly, the Conservative Party is pleased to offer the incumbent Sheriff Tom Dougherty our hearty endorsement in this fall’s election.”

Dougherty edged out then-Undersheriff Jim Szczesniak in the 2013 election that deeply split the county. This year, besides receiving the Conservative nod, the Livingston County Republican Committee unanimously seconded the nomination of incumbent Sheriff Thomas Dougherty on May 4.

No other candidate has come forward in the Sheriff’s race. 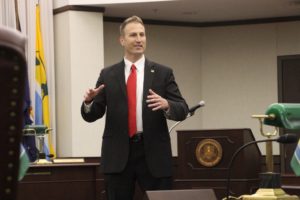