OSSIAN – The former Dansville wife who went to prison for illegally contacting her husband after trying to run him over with her car is back in jail for allegedly violating an order of protection.

According to a press release from Livingston County Sheriff Thomas Dougherty, Lois Mark, 55, now of Prattsburgh, is charged with felony Criminal Contempt in the First Degree.

On March 3 at approximately 7:50 p.m., the Sheriff’s Office responded to a residence on McCurdy Road in the Town of Ossian to investigate a possible violation of a court order. Witnesses reported that Mark had come to the residence of a person who had an active order of protection against her.

On March 4, Deputy Brent Gibbs located Mark and arrested her. This arrest was a felony as Mark had a previous conviction for Criminal Contempt in the Second Degree in 2017.

Mark was turned over to Central Booking Deputies at the Livingston County Jail for processing and pre-arraignment detention.

Dansville Village Justice Scott Kenney arraigned Mark and ordered her held at the Livingston County Jail on $2,500 cash or $5,000 bond.

“I caught him and her on a motorcycle together. I was coming down the street and pulled in the driveway where she lived. I confronted them […] and pulled the car in front of him to block him,” said Mark at first. She denied that her husband had to jump out of the way to avoid being struck. “I stopped before reaching him. There was plenty of room for him.”

After a bench conference and speaking to her attorney, Mark pled guilty to the Reckless Endangerment.

“I drove towards my husband to try and run him over because I was angry and upset and mad. I don’t know how close I got to him,” said Mark.

Prosecuting Assistant District Attorney Josh Tonra asked whether she cared what the result of hitting him was. She said ‘No.’ The judge accepted her guilty plea.

On Feb. 7, 2017, County Court Judge Robert Wiggins sentenced her to 1 to 3 years in prison for Violation of Probation for contacting her husband, the protected party in the order of protection resulting from the case.

She will return to court at a later date to answer the charges. 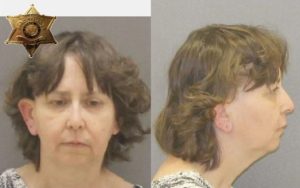