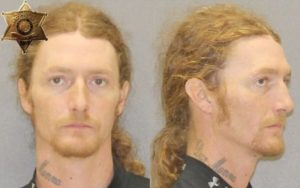 AVON – The Livingston County Sheriff’s Office arrested a Hornell resident for allegedly carrying drugs on 390 in Avon on Sunday.

On Nov. 13, Deputy Shawn Whitford stopped a vehicle for an alleged vehicle and traffic law violation on 390. During a roadside interview with the driver, identified as Philip Hann, the Deputy Sheriff observed what was believed to be the odor of marijuana emanating from the vehicle.

Following the investigation, Hann was found to be in possession of Oxycodone pills, Hydrocodone pills, and 55 grams of what is believed to be marijuana. Hann was taken into custody.

Hann has a prior Livingston County conviction for felony Criminal Possession in the Fifth Degree. This means that, if found guilty, the potential sentence on this charge could be harsher than a first-time offender. He is presumed innocent of these charges.

Avon Town Justice Michael Torregiano arraigned Hann and ordered him held at the Livingston County Jail on $500 cash or $1,000 bond.