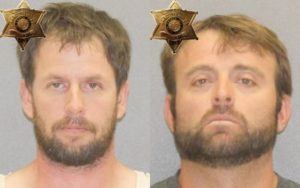 On Sept. 26 at about 10:50 p.m., Deputy Shawn Whitford assigned to Operation Safe Interstate observed an alleged Vehicle and Traffic Law violation. The Deputy initiated a traffic stop on the vehicle. The driver identified himself as Young.

The Deputy allegedly observed signs that Young was impaired. Deputy Brandan Flickner of the Sheriff’s STOP DWI Unit arrived on scene and Young performed field sobriety tests. The Deputies arrested Young for felony DWAI Drugs for having a previous DWI conviction within the last ten years.

A subsequent search of the vehicle found two bags of what is believed to be heroin, a hypodermic needle, an open container of alcohol, and several other items of drug paraphernalia. Deputies charged both Young and Brown with possessing these items.

Young was transported to the Livingston County Sheriff’s Office headquarters in Geneseo for a drug evaluation. Sheriff’s Sergeant James Merrick, a certified Drug Recognition Expert (DRE), alleges that Young was under the influence of a drug and could not safely operate a motor vehicle.

Both Young and Brown were transported to Central Booking at the Livingston County Jail for processing and pre-arraignment detention. The District Attorney’s Office recommended bail at $1500 cash or $3000 bail for Young.