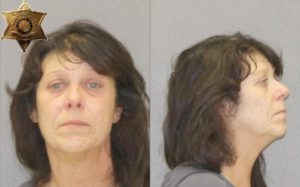 YORK – The Livingston County Sheriff’s Office arrested a Painted Post woman for allegedly driving while her ability was impaired by a narcotic.

According to a press release from Sheriff Thomas Dougherty, Beth Fletcher, 51, was arrested for misdemeanor Driving While Ability Impaired by Drugs.

On Nov. 6, 2016 the Sheriff’s Office dispatched Deputy Brandan Flickner of the Sheriff’s STOP DWI Unit to Genesee Street in the Town of York to investigate a report of a vehicle that was swerving all over the road. The Deputy arrived in the area and located what is believed to be the vehicle in question. The operator was identified as Fletcher.

A roadside investigation ensued to determine if Fletcher was impaired or could safely operate the vehicle. Deputy Flickner took Fletcher into custody.

The Deputy took Fletcher to the Sheriff’s Office Headquarters in Geneseo for a Drug evaluation. Deputy Connor Sanford, a certified Drug Recognition Expert (DRE), performed the evaluation. Deputy Sanford determined that Fletcher was impaired by a narcotic drug and could not safely operate a motor vehicle.

Fletcher was turned over to Central Booking Deputies at the Livingston County Jail for processing and pre-arraignment detention. Fletcher was arraigned on Nov. 8 in York Town Court before Justice Purtell. The Judge did release Fletcher on her own recognizance (ROR).