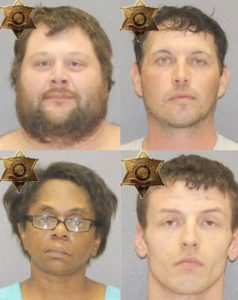 AVON — The Livingston County Sheriff’s Office arrested four people on drug charges on 390 this past Tuesday.

On September 20, 2016 at about 8:40 p.m. Deputy Shawn Whitford was assigned to Operation Safe Interstate when he observed a vehicle traveling south on Interstate 390 violating the NYS Vehicle and Traffic Law. The Deputy Sheriff conducted a traffic stop on the vehicle and met with the operator of the vehicle, identified as James Stiner.

A Department of Motor Vehicles check on Stiner’s license showed that his privilege to operate a motor vehicle was suspended.

The other occupants identified themselves as Adam Fuetterer, Tricia Neal, and ‘Bradley’ Catlin.

Deputies Brandan Flickner and Connor Sanford of the Sheriff’s Office STOP DWI Unit responded. Further investigation led to the discovery that one of the passengers had lied about his identity. Passenger Jacob Catlin allegedly admitted that he used the name ‘Bradley’ when he was first questioned by Deputy Whitford due to being on probation out of Monroe County.

A subsequent search of the vehicle led deputies to a quantity of what is believed to be heroin and crack cocaine as well as drug paraphernalia.

Deputy Connor Sanford conducted further interviews of the driver and suspected that he may be operating under the influence of drugs. A series of roadside tests were administered and James Stiner was placed under arrest for Driving While Ability Impaired by Drugs.

Stiner was transported to the Livingston County Sheriff’s Office headquarters in Geneseo for further examination by Deputy Flickner, a Drug Recognition Expert.

All four subjects were transported to Central Booking at the Livingston County Jail for processing and pre-arraignment detention.