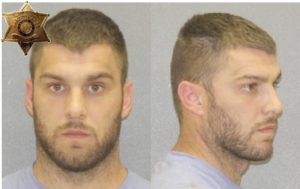 LIVINGSTON COUNTY – A County Court Judge recused himself from a case where a family member is alleged to have been the victim of theft at the hands of a Bloomfield man in September 2016.

“I believe that the alleged victim is a blood relative of mine,” said Judge Robert Wiggins. “That necessitates that I recuse myself, and I will do so. I recuse myself.”

Both Lewis’ defense counsel, Dan Magill, and Assistant District Attorney Justin Hill stated their agreement with the judge’s action on the record.

Judge Wiggins continued Lewis’ bail at $5,000 cash or $10,000 bond, which Lewis has posted. Lewis will remain free from jail and at liberty unless a future judge changes his bail status. He is due back in Livingston County Cort before Judge Dennis Cohen on Jan. 5.

“Even better that I not make any decisions,” said Judge Wiggins. “Bail continues until January 5.”

The Livingston County Sheriff’s Office arrested Lewis on Sept. 16, 2016 for felony Grand Larceny in the Third Degree for allegedly passing a check for over $9,000 from a closed account.