NUNDA – The Livingston County Sheriff’s Office arrested a Nunda man on a felony charge for allegedly getting into a physical altercation with a person who is the subject of an order of protection.

According to a press release from Thomas Dougherty, Curtis Yeoman, 32, was arrested for felony Criminal Contempt in the First Degree, misdemeanor Criminal Obstruction of Breathing, two counts of misdemeanor Endangering the Welfare of a Child, and violations including Harassment in the Second Degree and Aggravated Unlicensed Operation of a Motor Vehicle.

On June 8, deputies were dispatched to a residence in the Town of Nunda for a domestic incident between a male and a female. Upon arrival, they found that the male suspect Yeoman, had left the residence. Deputies allege that prior to leaving, Yeoman and a female victim got into a verbal argument and that the argument allegedly turned physical.

Deputies allege that Yeoman grabbed the female by the throat and threw her onto a bed in front of two children, while there was a court-issued order of protection in place between Yeoman and the female.

Deputies continued the investigation and were able to locate Yeoman in the Town of Fillmore and took him into custody. 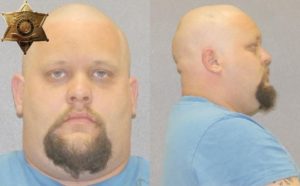