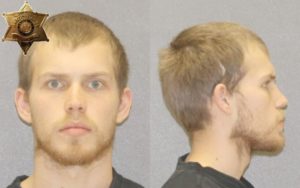 AVON – The Livingston County Sheriff’s Office arrested a Dansville man as the first suspect in an Avon burglary investigation.

According to a press release from Sheriff Thomas Dougherty, Nicholas Young, 22, of Dansville, was arrested on Friday, March 17 for felony Burglary in the Second Degree, misdemeanor Petit Larceny and misdemeanor Criminal Mischief in the Fourth Degree.

“Additional arrests are pending,” said Dougherty in the release.

Investigators allege that in July 2016, Young and an accomplice went to a residence on Bronson Hill Road in the Town of Avon and broke into the house by kicking in a garage entry door, damaging it.

The pair are believed to have stolen a television and sold it at a pawn shop in Henrietta. Sheriff’s Office investigators located and seized the television.

Geneseo Town Justice Kathleen Houston arraigned Young and remanded him to the custody of the Sheriff on $1,000 cash or $2,500 bond. The District Attorney’s Office recommended that bail be set at $2,000 cash or $4,000 bond.

Young paid his bail and was released.