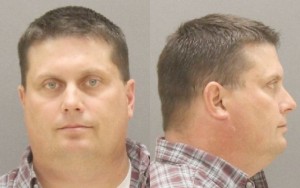 CALEDONIA – The Livingston County Sheriff’s Office has leveled another felony charge against a local contractor the day after he pled guilty to two felonies for theft.

According to a press release from Livingston County Sheriff Thomas Dougherty, Kurt Kline, 45, was arrested for felony Grand Larceny in the Third Degree.

After the two-month investigation by Investigator Joshua Monster with the Sheriff’s Criminal Investigations Division, the Sheriff’s Office alleges that Kline accepted $5,200 in May 2015 to renovate a Livingston County business but never started the work.

Kline was arrested and turned over to Deputies at the Livingston County Jail for processing and arraignment. Kline was later arraigned in Caledonia Village Court before Justice Kyle McKay, who released Kline on his own recognizance.

Since Livingston County Judge Robert Wiggins allowed him to remain out of jail after his guilty plea, Kline was released from custody.

The Livingston County District Attorney’s Office is recommending a sentence of 5 to 10 years in prison for Kline’s earlier convictions. If Kline is able to come up with $40,000 of restitution in advance, the sentence recommendation will be 3 to 6 years.