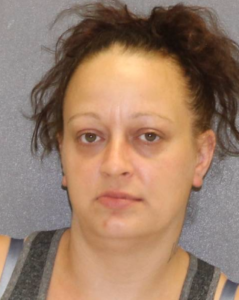 GENESEO – The Geneseo Police Department arrested a Lakeville woman after security cameras at Walmart allegedly caught her stealing more than $230 of Red Bull energy drinks from the store.

According to a press release from the Geneseo Police Department, Breanna Engert, 32, was arrested for misdemeanor Petit Larceny.

On May 26, Engert allegedly piled a shopping cart with $231.37 of Red Bull and left the store with it without paying. Geneseo Police obtained an arrest warrant for her arrest shortly thereafter.

On June 22, Livingston County Sheriff’s Deputy Connor Sanford located Engert and turned her over to the Geneseo Police Department for arraignment. Officer Zachary Hinkson handled the arrest for Geneseo Police.

Geneseo Village Justice Thomas Bushnell arraigned Engert and remanded her to the Livingston County Jail in lieu of $1,500 cash or $3,000 bond.