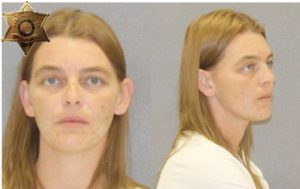 GENESEO – The Livingston County Sheriff’s Office found and arrested a woman in Geneseo who is wanted in Tennessee for multiple felony fraud and theft-related charges.

According to a press release from Livingston County Sheriff Thomas Dougherty, Peggy Merrill, 34, was arrested and held as a fugitive from justice.

Merrill is accused of Failure to Appear in court in a theft and check fraud case in Coffee County, Tennessee. Coffee County said that and that they would extradite her if she was located.

Livingston County Sheriff’s Deputy John Morgan had contact with Merrill prior to the warrant being advised. Deputy Morgan then located Merrill at her place of employment and took her into custody.

Merrill was transported to Central Booking at the Livingston County Jail to be held for arraignment. She now faces extradition to Tennessee.