LEICESTER – Despite a driver’s insisting that hitting a deer led to his harmless crash with a tree on Tuesday, investigating New York State Troopers found no evidence that he had actually struck a deer.

The investigating Trooper said that the driver was southbound on River Road a little too fast when he ran off the road and struck the tree just north of Jones Bridge Road at about 2:10 p.m. The driver was uninjured but insisted, sometimes passionately, that he had struck a deer before veering off the road.

“I’ve investigated hundreds of car-deer accidents, and I saw nothing that suggested that he hit a deer,” said Trooper Eric Huynh. “No blood, no hair, no damage to the vehicle besides what came from the tree.”

A Livingston County EMS ambulance crew checked the driver, a male, for injuries and did not transport him from the scene.

Huynh said that he did not charge the driver with any traffic violations. 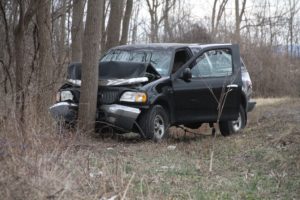