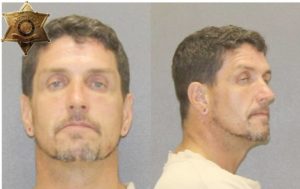 GROVELAND – The Livingston County Sheriff’s Office arrested an Olean resident who was apparently desperate to hide a hypodermic instrument after crashing his car into a utility pole on Tuesday.

On July 26 at about 5:23 p.m., the Livingston County Emergency Communications Center (E-911) received a call advising of a car into a pole on Groveland Road near Hunts Corners.

Deputy Sheriffs arrived on scene and found both a male and female already out of the vehicle. Hurley allegedly told Deputies that she had been the one driving the vehicle initially but later changed her statement. Deputies later arrested her for giving false information to investigating officers.

Deputies allege that Cassidy was actually the one driving and failed to negotiate a curve in the road, crossed over into the northbound lane, then crashed into a utility pole before coming to rest in a ditch.

Deputy Connor Sanford took Cassidy into custody. As Cassidy was being processed at the jail, Deputies allegedly saw an orange object sticking out of his behind.

Deputies attempted to remove the object, but, Cassidy allegedly pushed the object further in to and refused to produce it. He apparently complied eventually and the object was recovered. The object was another hypodermic instrument.

Cassidy was additionally charged with the promoting prison contraband.

Cassidy has been to prison five times in the past 23 years for theft and burglary related charges.

Geneseo Town Justice Kathleen Houston arraigned Cassidy on the contraband charge and ordered him held at the Livingston County Jail without bail.

Groveland Town Justice Jenean Love arraigned Cassidy on the tapering with physical evidence charge and also remanded him to jail without bail.

Hurley was processed at Central Booking and is awaiting arraignment. 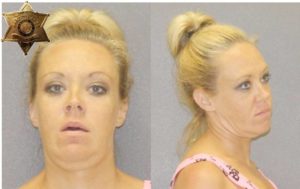