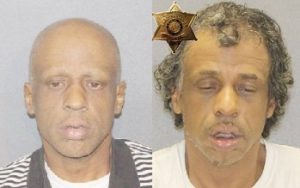 AVON – The Livingston County Sheriff’s Office arrested a Rochester man on misdemeanor drug charges almost exactly one year after the last time he was caught.

According to a press release from Sheriff Thomas Dougherty, Clifford Smith Jr., 54, was arrested for misdemeanor Criminal Possession of a Controlled Substance in the Seventh Degree and Unlawful Possession of Marihuana, a violation after he was stopped for a traffic violation.

Deputy Shawn Whitford, who is assigned to the ‘Operation Safe Interstate’ detail, stopped the car for the alleged violation on July 2, 2016. His last arrest in Livingston County was on July 3, 2015.

During the course of the investigation, the Deputy found that Smith had a small quantity of marijuana and some Suboxone without a prescription.

Smith was taken into custody and turned over to Central Booking at the Livingston County Jail. He was processed and held in pre-arraignment detention.

Avon Town Justice Michael Torregiano arraigned Smith on July 3 and remanded him to the Livingston County Jail on $250 cash or $500 bond.