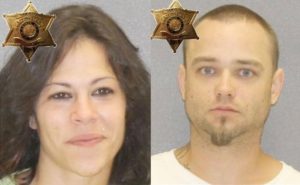 NOTE: The Livingston County Sheriff’s Office originally attached a booking photo of Luke Switzer to this press release instead of Brett Phillips. Switzer was not involved in this incident.

On Aug. 27 t about 11 p.m., Deputy Shawn Whitford made a traffic stop on Rte. 5&20 in Avon after a vehicle allegedly failed to signal a turn. The driver of the car Nikki Phillips, was allegedly found to have a suspended driver’s license and was placed under arrest.

A subsequent search of the vehicle allegedly yielded multiple needles, two bags of what is believed to be crack cocaine, other drug paraphernalia, and brass knuckles.

Both suspects were transported to the Livingston County Jail.