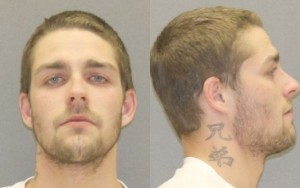 GENESEO – A Nunda Man who is on parole for dealing heroin in Dansville was rearrested on Saturday for allegedly possessing a needle with some heroin in it on I-390 in Geneseo.

On April 9 at approximately 9:17 p.m., Deputy Sheriff Shawn Whitford of the Livingston County Sheriff’s Office was working on Interstate 390 as part of Operation Safe Interstate with his K-9 partner Utah when he allegedly observed a vehicle traveling south on the interstate with an alleged registration violation.

The Deputy stopped the vehicle and alleged that a passenger in the vehicle, Swan, was in possession of a hypodermic needle that contained some heroin. Swan was placed in custody. During the investigation it was also found that Swan was on parole and was out past his assigned curfew.

Geneseo Town Justice Kathleen Houston arraigned Swan and remanded him to the Livingston County Jail on $250 cash or $500 bond.

The Sheriff’s Office also contacted New York State Parole. Swan will be held at the Livingston County Jail on a violation of parole.

Swan was arrested as part of the Livingston County Drug Task Force’s 2015 ‘Spring Roundup’ for Criminal Sale of a Controlled Substance in the Third Degree. He was convicted of this charge and spent over 3 months at the New York State Department of Corrections drug treatment campus at Willard Correctional Facility starting in November 2015. He was released to parole on March 1, 2016.