According to a press release from Sheriff Thomas Dougherty, a driver, Daniel Zielinski Sr., 52, of Conesus, was arrested for felony Criminal Sale of a Controlled Substance in the Third Degree, misdemeanor Aggravated Unlicensed Operation of a Motor Vehicle in the Third Degree, and misdemeanor Criminal Possession of a Controlled Substance in the Seventh Degree.

On Dec. 4 at approximately 10:40 p.m., Deputy Brandan Flickner, who is a member of the STOP DWI Unit, stopped a vehicle on East Avon-Lima Road for an alleged Vehicle and Traffic Law violation. The Deputy Sheriff identified the driver of the vehicle to be Zielinski and the passenger as Lefrois.

During the investigation, Flickner suspected that the two were involved with drug activity.

The investigation alleges that Suboxone strips in the vehicle, so Zielinski and Lefrois were taken into custody for Criminal Sale of a Controlled Substance in the Seventh Degree, a misdemeanor.

But, Flickner also alleges that Zielinski was in possession of cocaine and that as the vehicle was pulling over, Zielinski gave Lefrois cocaine to hide it. Transferring control of the alleged cocaine led to felony charges for both.

Lefrois was arrested for felony Criminal Possession of a Controlled Substance in the Fifth Degree.

Flickner also alleges that Zielinski was driving without a license.

Both Zielinski and Lefrois were turned over to Central Booking Deputies at the Livingston County Jail for processing and pre-arraignment detention.

The two were later arraigned in the Town of Avon Court before Justice Peter  Piampiano, who remanded both Zielinski and Lefrois to the Livingston County Jail without bail. 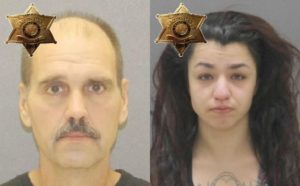