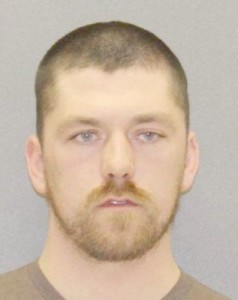 DANSVILLE – The Livingston County Sheriff’s Office and Dansville Police Department worked together to catch and arrest a fleeing Canadice driver who they believe was driving under the influence of a drug.

According to a press release from Sheriff Thomas Dougherty, David Stuver, 30, was arrested for felony DWI, misdemeanor Reckless Endangerment and numerous Vehicle and Traffic Law violations that included Reckless Driving and several tickets for running stop signs and not signaling while he was attempting to evade police.

When Deputy Wade activated his emergency lights for the motorist to stop his vehicle, the operator of the vehicle attempted to flee from the Deputy. Deputy Connor Sanford was also in the area and closed in on the suspect vehicle with Deputy Wade, as well as Officer Chapman of the Dansville Police. The suspect finally stoppe his vehicle on Leonard Street and was taken into custody.

Stuver was transported to the Livingston County Jail for processing and arraignment in the morning. Stuver was arraigned on March 6 in Dansville Village Court before Justice Werth and held on $10,000 cash or $20,000 bond.

The arrest was handled by Deputy Michael Wade, assisting him with the investigation included Deputy Connor Sanford and Deputy Morganne Harrington of the LCSO, and Officer Burley and Officer Chapman of the Dansville Police Department.