GENESEO – A Wayland pair are both charged with felonies for allegedly carrying heroin and crack cocaine on 390.

On March 2, 2018 at approximately 5:20 p.m. Deputy Shawn Whitford was assigned to the Operation Safe Interstate Initiative when he stopped on vehicle on Interstate 390 for a Vehicle and Traffic Law violation.

They also allegedly had a 14 year old passenger in the vehicle.

Feely was charged with Vehicle and Traffic Law violations in addition to the above charges.

Assisting Deputy Whitford with the arrests was Deputy John Morgan. The 14-year-old was turned over to ‘a responsible third party.’

Both Feely and Milliman were turned over to Central Booking Deputies at the Livingston County Jail for processing and pre-arraignment detention.

However, when Feely was being brought into the jail facility she was found to be in possession of another bag of crack cocaine. She was additionally charged with felony Attempted Promoting Prison Contraband in the First Degree and misdemeanor Criminal Possession of a Controlled Substance in the Seventh Degree.

Town Justice Kathleen Houston arraigned both defendants. The District Attorney’s Office recommended bail for both be set at $5,000 cash or $10,000 bond.

Houston ordered Milliman held at the Livingston County Jail on $1,000 cash or $2,500 bond.

Both are scheduled to return to court at a later date to face the charges. 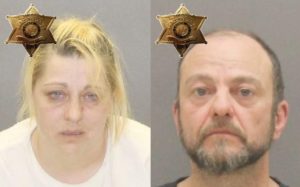