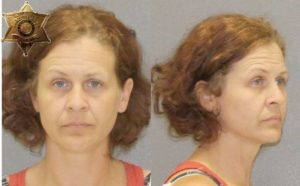 AVON – The Livingston County Sheriff’s Office arrested a Hornell resident on Tuesday on drug charges after finding that she did not have a valid license.

According to a press release from Livingston County Sheriff Thomas Dougherty, Jamie Johnson, 38, was arrested for misdemeanor Criminal Possession of a Controlled Substance in the Seventh Degree and misdemeanor Aggravated Unlicensed Operation in the Third Degree.

On July 5, Deputy Bob Holt was assigned to Interstate 390 as part of the Operation Safe Interstate detail and did conduct a traffic stop on a vehicle for a traffic violation. During the course of the stop it was found and alleged that the operator of the vehicle, Johnson, was driving while having a suspended New York State Driver’s License.

Further investigation alleges that Johnson had eight rocks of crack cocaine. Johnson was placed into custody.

Johnson was transported to Central Booking at the Livingston County Jail where she was processed and held in pre-arraignment detention.

Avon Town Court Michael Torregiano arraigned Johnson on the evening of July 5 in Avon Town Court and remanded her to the Livingston County Jail on $250 cash or $500 bond.