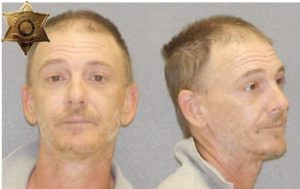 AVON – The Livingston County Sheriff’s Office arrested a Rochester resident for allegedly driving without a license and carrying unprescribed pills.

According to a press release from Sheriff Thomas Dougherty, Kevin Bull, 45, was arrested for misdemeanor Criminal Possession of a Controlled Substance in the Seventh Degree, misdemeanor Aggravated Unlicensed Operation of a Motor Vehicle in the Third Degree, and Speeding, a violation.

On Aug. 8, Deputy Shawn Whitford stopped a vehicle for speeding as part of Operation Safe Interstate. The driver of the vehicle was identified as Bull. His license had been suspended for Failure to Answer a Summons.

A subsequent search of the vehicle led to the discovery of what are believed to be several pills of controlled substances. Bull allegedly had no prescription for the pills.

Bull was transported to Central Booking at the Livingston County Jail for processing and pre-arraignment detention.

Avon Town Justice Peter Piampiano arraigned Bull on Aug. 9 and ordered him held at the Livingston County Jail on $500 cash or $1,000 bond.