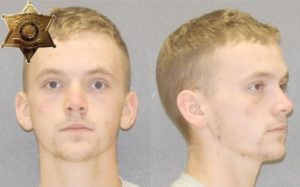 According to a press release from Sheriff Thomas Dougherty, Gary Muellen III, 20, was arrested for two counts of Criminal Possession of a Controlled Substance in the Seventh Degree and vehicle and traffic law infractions.

The Livingston County Sheriff’s Office alleges that on Aug. 20 at about 4:45 p.m., Deputy Shawn Whitford, assigned to Operation Safe Interstate, saw a vehicle traveling southbound with numerous vehicle and traffic law violations. The Deputy stopped the car and identified the driver as Mullen.

Assisting in the investigation was Sgt. Chad Draper and his K9 partner Vader.

Mullen was taken into custody and transported to and booked in at the Livingston County Jail.

Muellen has since posted bail and been released.