LIVINGSTON COUNTY – The Livingston County Sheriff’s Office arrested a Holley resident and a Hamlin resident for allegedly possessing drugs on 390.

According to a press release from Sheriff Thomas Dougherty, Richard Spence III, 46, of Holley, was arrested for Shane O’Mara, 31, of Hamlin, was arrested for misdemeanor Criminal Possession of a Controlled Substance in the Seventh Degree, misdemeanor False Personation, Unlawful Possession of Marijuana, which is a violation, and Consumption of Alcohol in a Motor Vehicle, which is a violation.

On Nov. 3, Deputy Shawn Whitford assigned to the Sheriff’s Operation Safe Interstate stopped a car for an alleged vehicle and traffic law violation. During his roadside investigation, Whitford found that the driver, Spence, was in possession of what was believed to be Hydrocodone pills. Hydrocodone is a controlled substance and Spence allegedly did not have a prescription for them.

The Deputy also spoke to the passenger in the vehicle, who allegedly provided a false name. He was eventually identified as O’Mara, who had active arrest warrants for him from the New York State Police and Ogden Police Department. O’Mara was found to be in possession of cocaine, marijuana, and was consuming alcohol in the vehicle.

Both Spence and O’Mara were turned over to Central Booking Deputies at the Livingston County Jail for processing and pre-arraignment detention.

Geneseo Town Justice Kathleen Houston arraigned both men. Houston ordered Spence to be held at the Livingston County Jail on $250 cash bail or $500 bond and ordered O’Mara to be held on $1,000 cash or $2,000 bond. 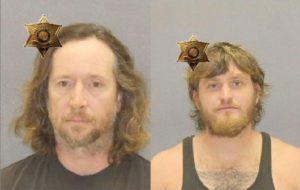