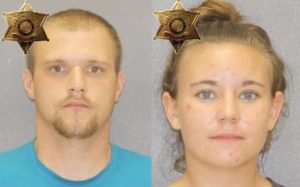 According to a press release from Sheriff Thomas Dougherty, Jesse Earley, 24, was arrested for misdemeanor Driving While Ability Impaired by Drugs, Driving While Ability Impaired by Drugs and Alcohol, and misdemeanor Criminal Possession of a Controlled Substance in the Seventh Degree, and Failure to Signal Less Than 100 Feet from Turn, Inadequate Exhaust, and Uninspected Motor Vehicle, all of which are violations.

Katie Moses, 19, was arrested for misdemeanor Criminal Possession of a Controlled Substance in the Seventh Degree.

On Aug. 28 at about 9 p.m., Deputy Shawn Whitford conducted a traffic stop on a vehicle at Lake Avenue in the Village of Lima for allegedly driving erratically and inadequate exhaust. When Deputy Whitford approached the vehicle, he allegedly observed a plastic bag and a quantity of what is believed to be crack cocaine inside the vehicle.

At the conclusion of the investigation, Earley and Moses were taken into custody.

Deputy Brandan Flickner from the STOP DWI Unit, who is also a Drug Recognition Expert, responded to the scene and evaluated Earley, resulting in his arrest for Driving While Ability Impaired by Drugs.

Earley and Moses were transported to the Livingston County Jail.

Both remain incarcerated at the Livingston County Jail.