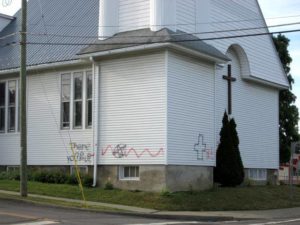 NYLON – New York State Police arrested four young men, some from Livingston and some from Steuben County, for allegedly spraypainting obscene words and symbols on a church, street signs and a farm property in Wayland.

The GeneseeSun.com is witholding the name and photo of the 16-year-old because he could be eligible for treatment as a youthful offender in court.

On July 12, 2016, Wayland based State Police made the arrests as part of an investigation into obscene words and symbols that were spraypainted onto the side of Wayland United Methodist Church in the Village of Wayland, Steuben County.

Moose and Butcavage were issued appearance tickets and released.

Mastin and the 16-year-old were arraigned in the Village of Wayland Court and remanded to the Steuben County Jail in lieu of $1,500 cash or $3,000 bond.

They are scheduled to re-appear at Town of Wayland Court at a later date.

The New York State Police were assisted by the Livingston County Sheriff’s Office. 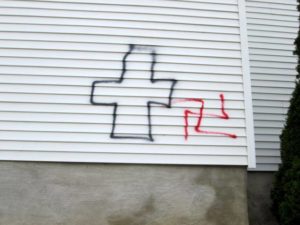