WEST SPARTA – The Livingston County Sheriff’s Office arrested a North Cohocton resident for allegedly having sexual contact with and sending indecent pictures to a 14-year-old subject of an order of protection.

The investigation, which was handled by Deputy Bob Holt and Sheriff’s Investigator Brad Schneider, began with allegations that Dunham had an inappropriate relationship with a 14-year-old female.

Investigators allege that Dunham had sexual contact with the 14 year old and also sent indecent pictures of himself to her. Dunham already had an existing order of protection by the court issued against him to stay away from her prior to the allegations.

Investigators say that this took place in West Sparta.

Dunham was turned over to Central Booking Deputies at the Livingston County Jail for processing and pre-arraignment detention.

West Sparta Town Justice T. Sue Mahany arraigned Dunham and went along with the recommendation of the District Attorney’s Office to order him held at the County Jail on $2,500 cash or $5,000 bond. 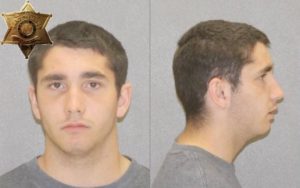