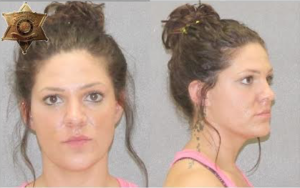 According to a press release by Sheriff Thomas Dougherty, Katherin A. Shanken, 26, was arrested for Aggravated Unlicensed Operation of a Motor Vehicle in the 1st degree.

On August 17, 2016 Deputy Jason Butterbrodt was assigned to Operation Safe Interstate when he pulled a vehicle over for speeding.

The driver of the vehicle was identified as Shanken. A routine check of Shanken’s driver’s license revealed that her driving privileges had been suspended 24 times.

Shanken was taken into custody.