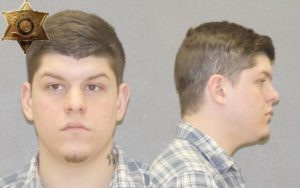 SPRINGWATER – The Livingston County Sheriff’s Office arrested a Springwater man on Wednesday for allegedly attacking and critically injuring a baby.

According to a press release from Livingston County Sheriff Thomas Dougherty, Matthew Sackett, 22, was arrested for Assault in the First Degreeand also Reckless Assault of a Child, both felonies.

Investigators allege that Sackett broke multiple ribs and fractured the skull of a 22-month-old. The child is at Strong Hospital.

The arrest and investigation were handled by Sheriff’s Investigator Dan Rittenhouse of the Criminal Investigations Division.

Caseworkers with Child Protective Services (CPS) at the Livingston County Department of Social Services did assist with the investigation and continue to remain active in this case.

Sackett was turned over to Central Booking Deputies at the Livingston County Jail for processing and pre-arraignment detention.

On Feb. 15, in Springwater Town Justice Donald Haywood arraigned Sackett and went along with the recommendation of the District Attorney’s Office to order him held at the Livingston County Jail on $75,000 cash bail or $150,000 bond.