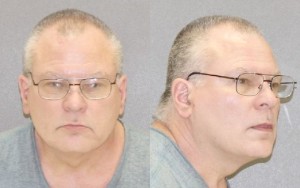 According to a press release from Sheriff Thomas Dougherty, David Pfuntner, 62, was arrested for three counts of misdemeanor Forcible Touching.

According to NYS Penal Law Section 130.50, Forcible Touching means that a person intentionally, and for no legitimate purpose, forcibly touches the sexual or intimate parts of another person for the purpose of degrading or or abusing such person; or or for the purpose of satisfying the actor’s sexual desire.

According to the New York Division of Criminal Justice Services, Pfuntner is a level 3 sex offender, or at maximum risk to re-offend. He was convicted of Sodomy in the Second Degree in Livingston County in 1982 for having deviate sexual intercourse with an 11-year-old.

The investigation was conducted by Sheriff’s Investigators Brad Schneider, Josh Monster, and Dan Rittenhouse under the direction of Captain Brian Applin, all of the Criminal Investigations Division.