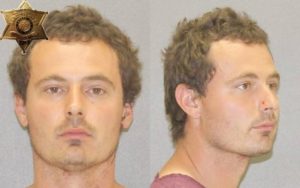 LIVONIA – The Livingston County Sheriff’s Office arrested a Livonia resident on a felony DWI charge after his vehicle veered from the road and rolled over.

According to a press release from Livingston County Sheriff Thomas Dougherty, Michael Bell, 29, was arrested for felony DWI and Moving From Lane Unsafely, a violation.

On Sept. 22, at about 9:30 p.m., an emergency call went out indicating a rollover motor vehicle crash on Stone Hill Road in Livonia. Deputies arrived on scene and located Bell still behind the wheel of the vehicle with non-life threatening injuries.

Ambulance crews transported Bell to Strong Memorial Hospital. He was treated and released. Deputy Brandan Flickner of the Sheriff’s STOP DWI Unit responded to the hospital for the follow-up investigation due to the suspicion of Bell driving under the influence of alcohol.

After the investigation, Bell was charged with felony DWI, because he has a prior DWI conviction within the past 10 years. Bell was released from the hospital and transported to Central Booking at the Livingston County Jail for processing and pre-arraignment detention.