YORK – The Livingston County Sheriff’s Office arrested a Brooklyn man who is believed to be in the country illegally for allegedly driving while under the influence of drugs with a child in the vehicle on Rte. 63.

According to a press release from Sheriff Thomas Dougherty, Brandon Abriz, 22, was arrested for felony DWAI under Leandra’s Law, misdemeanor DWAI Drugs, misdemeanor Endangering the Welfare of a Child, and violations including Unlawful Possession of Marihuana and several Vehicle and Traffic Law violations.

On May 20, 2017 at about 3:30 p.m., a vehicle was traveling southbound on Rte. 63 near Chandler Road and allegedly passed another vehicle unsafely. A Sheriff’s Office member who the press release says ‘was in the area’ says that the vehicle nearly caused a head-on collision.

A traffic stop was conducted on the vehicle and the driver was identified as Abriz. Also present in the vehicle was an adult female and her 4-year-old daughter. Abriz had no license to operate the vehicle.

Due to several observations made roadside including the recovery of what is believed to be marijuana from Abriz, a DWAI drug investigation was initiated. Sgt. Matthew Orman conducted the investigation and arrested Abriz for Driving While Ability Impaired by Drugs.

Abriz was then transported to Sheriff’s Office HQ for a drug evaluation by drug recognition expert Deputy Brandan Flickner. It was Flickner’s opinion that Abriz was unable to safely operate a motor vehicle due to being under the influence of cannabis and a narcotic analgesic.

Abriz allegedly ‘advised patrols that he had illegally crossed the border and was in the country illegally.’ Border Patrol was contacted after the arrest and Immigration and Customs Enforcement said that they will want custody of Abriz upon his release.

York Town Justice Thomas Porter arraigned Abriz and ordered him held at the Livingston County Jail on $10,000 cash or $20,000 bond. 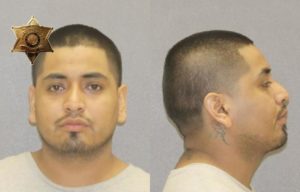