NUNDA – A call to check on a driver apparently sleeping at the wheel led to a charge for DWAI Drugs.

According to a press release from Livingston County Sheriff Thomas Dougherty, Grace Hicks, 35, was arrested for misdemeanor Driving While Ability Impaired by Drugs, misdemeanor Criminal Possession of a Hypodermic Instrument and Unlawful Possession of Marihuana, a violation.

On Feb. 18 at approximately 10:25 a.m., deputies were dispatched to a convenience store in Nunda to check the welfare of a female reportedly ‘passed out behind the wheel of a vehicle.’ Deputy Stephanie Schroeder was the first to arrive on scene and observed the vehicle parked in a no parking zone, but no one inside.

The deputy went in the store and located who is believed to be the driver, Hicks. It was determined and the investigation alleges that Hicks did drive her car to the store and the deputy believed that she was under the influence of drugs. Following the on scene investigation, Hicks was taken into custody for Driving While Ability Impaired by Drugs.

Sergeant Chad Draper did respond to the scene to assist and did locate and seize a hypodermic needle, a smoking device and marijuana. Hicks was transported to the Sheriff’s Office Headquarters in Geneseo.

Sheriff’s Sergeant James Merrick, who is a certified Drug Recognition Expert (DRE), did perform an evaluation related to Hicks impairment. The Sergeant concluded in his expert opinion that Hicks was under the influence of a central nervous system depressant and could not operate a vehicle safely. Hicks did also provide a urine sample that will be sent to the lab for testing. Hicks was turned over to Central Booking Deputies at the Livingston County Jail for processing and pre-arraignment detention.

Nunda Village Justice James Mann arraigned Hicks and released her on her own recognizance, with no bail required. She is scheduled to return to court at a later date for further court proceedings. 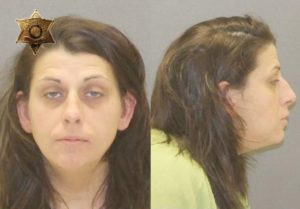