CALEDONIA – The Livingston County Sheriff’s Office arrested a Caledonia resident on a felony rape charge for allegedly having sex with a younger teen.

According to a press release from Sheriff Thomas Dougherty, Joseph McFadden, 19, is charged with felony Rape in the Second Degree and misdemeanor Endangering the Welfare of a Child.

On April 25, 2017 the Sheriff’s Office was called to investigate an alleged incident that occurred back in March of 2017, accusing McFadd of having sexual intercourse with a female who was under the age of 15.

These charges do not allege the use of force.

The investigation was conducted by Sheriff’s Investigator Gene Chichester of the Criminal Investigations Division and Deputy Jason Butterbrodt of the Road Patrol Division.

McFadden was turned over to Central Booking Deputies at the Livingston County Jail for processing and pre-arraignment detention. 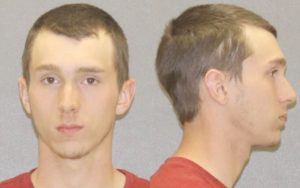