NUNDA – A traffic stop led to a surprise burglary arrest when a Livingston County Sheriff’s Deputy found what is believed to be ‘an electronic device’ stolen from DeGroff Road.

According to a press release from Livingston County Sheriff Thomas Dougherty, Stephanie Forrester, 34, and Sean Kohlmeier, 31, were both arrested for felony Burglary in the Second Degree and misdemeanor Petit Larceny.

On Jan. 28, members of the Sheriff’s Office Road Patrol, Forensic Identification Unit, and Criminal Investigations Division responded to an address on DeGroff Road in the Town on Nunda to investigate the theft of electronics and scrap metal. Approximately one week later, Deputy Shawn Whitford conducted a traffic stop and found a similar electronic device as one that had been reported stolen in the burglary.

Investigators say that the electronic device was in fact the one stolen from DeGroff Rd. At the time, the vehicle was being operated by Forrester from Bliss, NY. Investigators also believe they have identified where the stolen scrap metal was sold.

The follow up investigation by Inv. Dan Rittenhouse led to the arrests.

Forrester and Kohlmeier were turned over to Central Booking Deputies at the Livingston County Jail for processing and pre-arraignment detention. 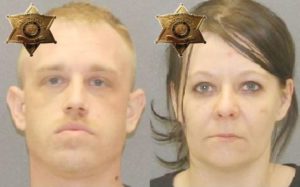