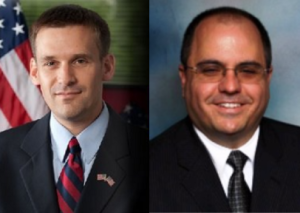 “I can say that Mr. McCaffrey has approached me,” said McGuire. “Both Mr. McCaffrey and Mr. Sciarrino are formally invited, and the door is still open to any other interested candidate who wishes to attend.”

There is no official word on whether McCaffrey will attend. In fact, McCaffrey has not confirmed whether he is running for re-election.

According to the DA-Greg McCaffrey Facebook page, McCaffrey held a political fundraiser in March at the Nines at Livingston.

The designating meeting will be May 9 at Peppermint’s Restaurant at 244 East Main Street in Avon. Interested candidates are asked to arrive by 7:30 p.m.