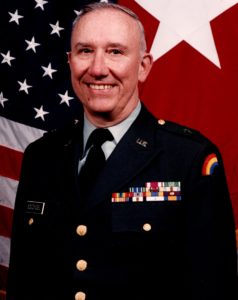 Promoted to the rank of Angel on July 26, 2020 after a valiant battle with cancer, surrounded by his loving family at his home on Conesus Lake.

Born January 27, 1937 in Utica, NY, David was the quintessential self-made man.  From humble beginnings, he went on to a successful, 37-year career serving his state and country with the New York Army National Guard, enlisting in the 102nd Military Police Battalion in 1959.  He subsequently held a wide variety of high level command and staff positions, including serving as commander of the state’s 42nd Infantry Division.  His career culminated with his promotion to Brigadier General and his assignment as Deputy Commanding General, New York Army National Guard.

David’s civilian life included a long tenure with Niagara Mohawk Power Company.  In addition to his many accomplishments, David remained a humble servant, living the creed of serving God, family and country.  Baptized Roman Catholic, he was an active member of St. Michael’s Episcopal Church in Geneseo.  David was a loving and devoted husband, father and grandfather. He loved spending time with his five grandchildren, enjoying vacations with them, watching their sporting events and sharing his love of the outdoors.  He was an avid hunter and fisherman and treasured his times hunting with his son, brother, nephews and close friends.  His love of country was always evident, from his flag flying on the shores of Conesus Lake (always lit at night) to his retired role with the Military Officers Association of America (MOAA), including a term as president, and their efforts to support Honor Flight and other veteran-related causes.

In light of the precautions necessitated by COVID-19, a private service will be held for family and close friends at St. Michael’s Church in Geneseo.  At the appropriate time, the family will hold a celebration of David’s life for family and his extended circle of friends. Donations in David’s memory can be made to Honor Flight Rochester, PO Box 23581, Rochester, NY 14692 or at https://honorflightrochester.org/donations/.  To send a condolence or share a memory please visit: www.doughertyfuneralhomes.com